New Trier shutout a very good Rockford offense for over 36 minutes of Friday night's game, going up 10-0 at half, en route to a 12-5 win over the Rams.

In the sixth meeting between these program, the Trevs evened the series, with the record being two wins for each team and two ties. It took a tremendous defensive effort and a shutout in the first half for senior goalie Kate Keller and five saves in the second half for senior Elizabeth McLane behind a solid defensive effort where the Trevians shutout Rockford for the last 11:33 of the game.

The attack might have played their best "team offense" of the season, with great ball momentum, cuts, spacing, unselfish play and a relentless ride. The stats won't reveal the play on the ride or on attack by Mia Shane, Hana Asghari, Courtney Laden, Audrey Rudolph, Sydney Durdov, Ava Diamond, Sophie Meyer and Molly Martin that provided great looks for Emma and Grace Curry to combine for eight first half goals.

Claire Ratke showed why she is leading the team in assists with her ability to find open cutters, making three beautiful feeds for goals. Addie Shevitz also had two assists on a nice 2v2 pick and roll and on a fast break. To provide some more rotation of the midfield for rest with Ellie Bornhoeft out, defender Anna Seftenberg also made a beautiful assist with a feed high to low to Emma Curry.

Meier finished the half with a goal with one second on the clock, after Lily Wallace grabbed a ground ball with 40 seconds left in the half to race down and set up a free position shot for Durdov, but after a stick deflected her shot wide of the cage, Wallace grabbed another ground ball and passed to Meier who ripped a shot just before the horn.

Even though Rockford was down 10-0 at half, the Rams offense, led by Issi Osborn kept fighting and got off ten shots, but with the game at 12-5 with 11:33 left, that is when the defense had an impressive stand to shut out Rockford. The offense only had the ball for 1 minute and 15 seconds in their offense end in that stretch also. Izzy Resnick, Gianna Malnati, Laden, Allie Trukenbrod, Brooke Portland, Natalie Freres, Grace Mawicke and Martin all combined for some great slides for doubles, and pressure on the ball to play great team defense.

The team finished with a season high 13 caused turnovers. 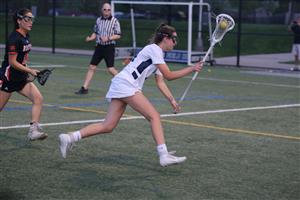