The Trevs made some big time plays against Oak Park, including four interceptions. But the highlight of New Trier's 18-6 win was junior Kennedy Meier's 13 draw controls, second most all time in a single game in New Trier girls lacrosse history.

In the annual cancer awareness game between the Huskies and Trevs, New Trier went up 5-0, but a young and athletic Oak Park team didn't back down, making it 6-2 and playing tough defense with 10 minutes left in the first half.

But the steady play of Meier kept the Trevs in control of the ball off the draws, leading to several fast break goals. Meier now has 90 draw controls on the season, and 170 for her career. That puts her 16 behind her sister Charley for third most career draw controls in school history.

After Oak Park cut the lead to four, Audrey Rudolph scored her second goal of the night after a nice feed by Addie Shevitz off a cut from the elbow at 9:34. The defense also stepped up, led by junior Grace Mawicke's two interceptions, one as she jumped a pass and raced down the field to set up a goal for the Trevs. The defense shutout the Huskies for almost the last ten minutes of the half. Meier tallied two goals, one on a free position and another on a high dodge at 3:07. Oak Park scored with 38 seconds left to make it 9-3 at half.

In the second half, Meier won the opening draw and Shevitz opened up the scoring on a dodge from the elbow past two defenders at 23:57. Courtney Laden fed to Grace Curry for the next goal. Then on the next possession, Emma Curry rolled the crease and zipped a pass to her sister Grace, who scored to make it 12-3 at 20:51. The Huskies answered back, and both teams traded goals until it was 14-5 with 13:38 left after Molly Martin scored on a drive from the top of the eight.

The Trevs got goals from Hana Asghari, Ava Diamond and Emma Curry before Shevitz finished the scoring at 2:29. The defense shut out Oak Park the last 8:32 of the game, highlighted by nice defense by Gianna Malnati and Brooke Portland, and big save by Elizabeth McLane and a nice caused turnover on a check by Allie Trukenbrod.

The Trevs and Huskies wore yellow laces from Go4TheGoal, to raise money and awareness for pediatric cancer. Oak Park head coach James Borja said that they raised over $700 just from donations at the game also.

Borja, a former coach at New Trier, lost his mom to cancer, Jan Borja. His mom was the principal at New Trier for several years and beloved by the school and community. Having an annual cancer game has been very special for connecting both programs. 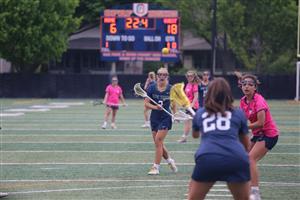